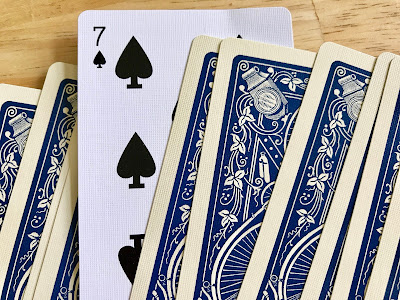 The 7 of Spades in Modern Cartomancy can warn of a challenging situation. It is not a card we hope to see, particularly in a love reading. Generally the 7 of Spades represents a setback or a reversal of fortune, and in relationship readings it invariably shows a cooling off of affections.

For example, the 4 of Hearts with the 7 of Spades would show a marriage or partnership on the rocks. There is a cooling of affections, and one or both parties feel frustrated and unfulfilled. This combination can also suggest that the partner drinks too much.

The 7 is Spades is the "drinking" card. It can denote imbibing alcohol or partaking of any kind of intoxicating substance including both prescription medications and illegal drugs. The combination 7 of Spades and Ace of Spades (the mind) can show intoxication. If the 4 of Spades is nearby, it can denote a hangover.

When surrounded by positive or neutral cards, the 7 of Spades can refer to social drinking or recreational drug use. With cards indicating a party or social interaction, the 7 of Spades will usually indicate that liquor will be a part of the celebration. The combination 7 of Spades with the 3 of Hearts can denote a cocktail party.

When falling with cards from the Club suit, denoting career or profession, the 7 of Spades can describe someone who works as a bartender, a barback, or a cocktail server. If the 2 of Diamonds is nearby, it would indicate that they work in a restaurant where liquor is also served.

The 7 of Spades is also the Card of addiction. Alcoholism or drug addiction is commonly represented by the combination 7 of Spades and 9 of Spades. The 9 of Spades shows something harmful (although this combination can also indicate that your prescription medication is causing you harm). If the 5 of Spades is nearby, it will show that others (family members, friends, etc.) can be hurt as well by the substance abuse.

The 7 of Spades is also a "water" card, but usually only in a negative sense.* It can predict anything from a faucet drip to a leaky pipe to an inconvenient rainstorm.

If you're looking to purchase a home, and the cards show the 7 of Spades near the Ace of Hearts along with a money card, you can be sure that you'll find a problem with the plumbing that will be costly to repair.

The absence of a big money card may simply indicate that the water heater needs replacement, especially if the 7 of Hearts is also present.

With Diamonds, the 7 of Spades will show financial setbacks. The surrounding cards will usually indicate the cause. If the 3 of Spades (loss) is nearby with a money card, it would show a gambling or trading losses.

In a general sense, the 7 of Spades is a card of stagnation and frustration.

When this card begins a line of cards, it indicates a long delay before the events outlined by the following cards can play out.

When the 7 of Spades ends a line of cards, it can show a lack of progress, or a stalled situation. It will usually indicate that events  will not play out as you hoped.

When it appears in the middle of a line of cards, the 7 of Spades indicates that the preceding cards are blocked, and the following cards are delayed. If the subsequent cards are positive, the situation will require patience and perseverance to achieve the predicted outcome.

Whenever and wherever it appears, the 7 of Spades is rarely a welcomed sight. You can bet that patience and perseverance will be required to overcome a difficult period of setbacks and frustrations.

* The card that represents water in a positive sense, such as swimming or boating, is the 10 of Clubs.
By J David Arcuri at July 14, 2017