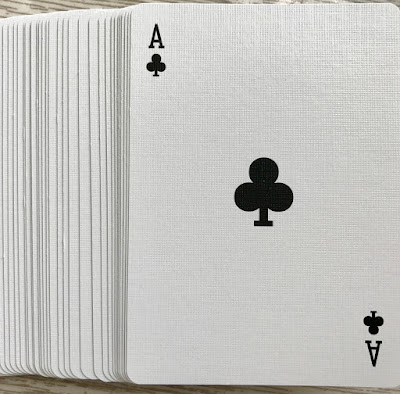 In traditional cartomancy, the Ace of Clubs is the card of marriage. In olden days, marriages were often arranged based on money and prestige. You could lift your social status by marrying your daughter off to noble family, or to a wealthy landowner. In many cultures the girl was expected to bring along a dowry as well, to add to the husband's holdings.  Based on the marriage contract she was usually considered to be the property of her new husband.

Today very few marriage are arranged this way in the western world. It is perhaps for this reason that the Ace of Clubs in modern cartomancy has lost the meaning of marriage. These days, most marriages are based on love, and may be better represented by cards in the suit of Hearts.

The Ace of Clubs also retains the meaning of "property," and it's the card that represents "a building" in Modern Cartomancy. The Ace of Hearts is the home, but the Ace of Clubs can represent anything from a friend's house, to the workplace, to a commercial establishment, to a large institution.

Here are a few fun combinations to consider...

The Ace of Clubs can represent a legal will, and it can also represent one's personal power of will. This card shows a personal choice backed by determination. When the Ace of Clubs falls in a reading about someone's intentions, it shows that they have already made up their mind on a course of action, and have no intentions of deviating from their chosen direction. The surrounding cards will usually offer a clue about the choice. If the Ace of Clubs is surrounded by Spades, it can show someone who is weak-willed, and unable to follow-through on their plans.
By J David Arcuri at July 13, 2017