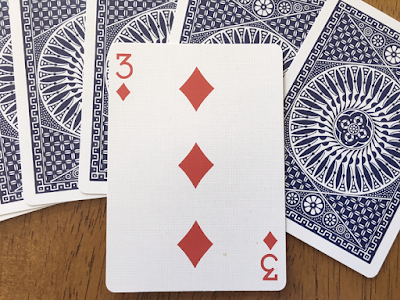 Some readers see positive financial growth in this card; in fact, I used to read it this way myself. But over the years I have found that for me the 3 of Diamonds is always challenging. At best it will show success only through blood, sweat and tears. When this card does represent money, it always indicates a tiny amount, or less money than you expect or hope to receive.

In a general sense, the 3 of Diamonds indicates reoccurring patterns or sporadic energies and actions. It can denote an event or behavior that is repeated at intervals, or describe an arrangement that is temporary in nature. As the outcome card, the 3 of Diamonds can show partial success, or a small victory that is won at great cost.

In love readings the 3 of Diamonds will often indicate a lack of commitment to the relationship. It can describe a lover who runs hot and cold, or someone who comes and goes in and out of your life. It can also describe a partner who will not or cannot put forth the required effort to sustain the relationship. With a Face card, the 3 of Diamonds describes a person who is fickle and changeable and unreliable.

I once did a reading for a young lady who was distraught over her boyfriend who had stopped responding to her phone calls and text messages. Her cards included the 4 of Hearts, which promised reconciliation, but the outcome card was the 3 of Diamonds. I told her that her boyfriend would be back in touch, but warned that it wouldn't be long before he would be off again with no word of his whereabouts. As predicted, the boyfriend re-established contact within the week, but was out of touch again the following month.

The 3 of Diamonds can also show a relationship on the side. Look for the 3 of Spades nearby to show deception, or the Queen or King of Spades to indicate the other woman/man. I also look for a Heart card in the mix to confirm the love affair.

The 3 of Diamonds is not all bad news. In work readings this card can indicate a part-time job or temporary work position. When falling with the 8 of Clubs, which represents full-time employment, the combination can refer to temporary or part-time work that will develop into a full-time job. This card can also represent moonlighting. If you already have steady employment, and the 3 of Diamonds appears in your work reading, it can point to putting in extra hours on your regular job, or picking up a temporary side job. The 3 of Diamonds is also the card that represents freelance work as opposed to regular employment.

In financial readings the 3 of Diamonds is a card of small or erratic growth. It reflects the ups and downs of the stock market, and is an important card in readings about stock investments and speculation. In a negative sense, this card can also talk about pyramid schemes, and with the 3 of Spade it can reveal a ponzi scheme or other fraudulent financial activities.

I always divine the 3 of Diamonds with a wary eye.  I know it will reveal a source of instability in the situation in question. Often the card preceding the three will show the source of the instability, and the card following the three will indicate the consequences of the erratic actions. Here's a quick sample three card reading illustrating the 3 of Diamonds in action...

The reading was done by a young lady who asked if the guy she recently started dating was falling in love with her.  She drew the following cards... 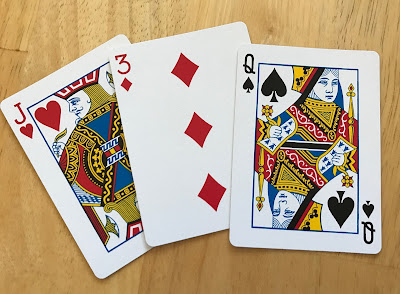 The predominance of red cards suggests an immediate "yes" answer. Let's see if we can back it up with the card meanings. The Jack of Hearts is a man in love, and I always look for him in response to this type of question. He faces toward the left, which is always the position of the querent, so I can be certain that the emotions he is feeling are directed toward her. But what about that Queen of Spades at his back?

First we should ask ourselves why the Queen of Spades in particular rather than any one of the other three Queens? What are the cards trying to tell us here? Well, we know that the Queen of Spades can represent the other woman, or an ex-partner. We have just discussed how the 3 of Diamonds can denote a side relationship. Could there be another woman involved in the equation?

I can't help but notice that the Jack and Queen look away from each other. I get the impression that their relationship is currently off, but the 3 of Diamonds warns that there is an on-again off-again relationship between these two that is not completely ended. Does this mean there is hanky-panky going on?

Probably not. Without more information, we can't assume deception. In fact, it turned out that this man had a child with his ex-girlfriend that he had not yet disclosed to the querent. The child  was the reason for maintaining a relationship with the ex.
By J David Arcuri at January 26, 2017