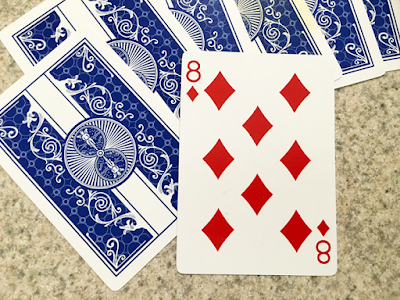 The Diamond suit is considered positive for the most part, but there are several Diamond cards that can show restriction and limitation. The 8 of Diamonds (8D) is one such card because it combines the balance of the number eight with the restless, unpredictable energy of the Diamond suit. The result is a card of caution that can reveal the need to strive for balance particularly in financial matters.

When the 8 of Diamonds falls with other cards of the Diamond suit, it most often warns of financial difficulties. This card can show a shortage of funds, or the need to curtail spending and balance the household budget. As an example, the AD + 8D can be a bank statement that shows deposits and withdrawals, or a credit card statement that shows credits and debits. The combination 4D + 8D would indicate a depleted bank account. With the 6D, the 8D would show putting aside money and saving for a rainy day.

When the 8 of Diamonds falls with Clubs it will advise cautious actions, or reveal business budgetary concerns.  My grandmother called this card "Money Coming and Going" because it highlights the financial flow-- where money is earned and where money is spent. This card can be a warning that the money is going out as fast as it comes in. The AC + 8D refers to the tax office (IRS), which saps our earnings.

Spades intensify the restrictive and cautionary qualities of the 8 of Diamonds, and will show forced or imposed limitations.  The classic combination for heavy debt is the 8D + 9S. The 9S shows a crushing obligation. The 2C (gifts) with the 8D can show disability or unemployment benefits-- someone forced to live on a restricted income. The AC is usually nearby to confirm the government assistance.

In health readings the 8 of Diamonds represents the eyes and vision. For example, the 8D with the 8S (the doctor card) would show an ophthalmologist or optometrist. The 8D followed by the 4S would denote vision problems. If the 3S is nearby, you're probably looking at eye disease.

In physical description readings the 8 of Diamonds will refer to something notable about the person's eyes. Nine times out of ten this will simply indicate that the person wears eyeglasses.

The meaning eyes can extend to the idea of seeing, or looking, or watching. For example, the combination 8D + 3H shows watching something artistic, and will usually refer to viewing art or some kind of performance such as a play. The 8D + 6C  is a television (viewing media), and the 8D + 2D is usually a movie (the 2D is the card of fiction and imagination). The 8D with the 4C can refer to the screen on your smartphone. In a general reading the cards surrounding the 8 of Diamonds can show what the person is looking for in life.

The 8 of Diamonds is the counting card. It counts what we have, and it counts what we don't have.  As such, it can represent numbers and mathematics.  In a career reading the 8D + 4D would show someone who is certified with numbers, or works as an accountant (CPA). The 8D + 6C is someone who balances the books, or is a bookkeeper.

In a reading for locating a lost item the 8 of Diamonds represents the pantry where food is stored. It makes perfect sense when you consider that the pantry is similar to a financial account. Food is deposited (stored) to be spent and then replenished-- coming and going.

Lastly, when looking at timing the 8 of Diamonds points toward the future, and will show delays for the present. It says, "Don't push things. Now is not the time for rash action. Now is the time for caution and careful planning, and future success is possible."