Reading Between the Lines...uh, Cards

As readers we sometimes find that the questions people ask the cards are not always the questions they most want answered. The seeker may feel shy or embarrassed about asking directly what they truly wish to know. I find this especially true with new clients, or during the more casual readings in public venues, such as at a psychic fair. I’ve learned that I must sometimes read between the cards to discover how best to serve my client’s needs.

For example, this is an actual reading done during a psychic fair in which a married woman asks, "Is my husband happy?" A quick look at the cards reveals that her husband's happiness may not be the seeker's primary concern.

To answer this question I used The Answer Spread. Six cards are drawn and laid out in two rows of three. The cards are read in pairs vertically only. The first column represents the premise of the question. The middle column provides the answer to the question, and the final column provides additional information to support the answer.

These are the playing cards that the seeker drew: 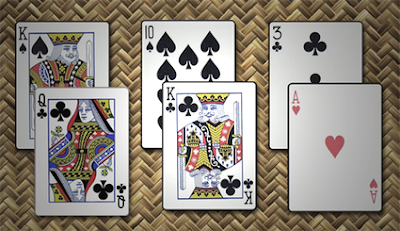 The two cards on the left represent the premise of the question. The King of Spades and Queen of Clubs in this position would represent the woman, her husband and their strong relationship together. The interplay between the two court cards can provide clues about the dynamics of the relationship between these two people. The woman is represented by the Queen of Clubs. She is outgoing and friendly. She likes to talk and enjoys socializing with other people. The husband is represented by the King of Spades. He is more quiet and reserved. He likes to take charge of a situation and handle things on his own. The querent mentioned that her husband was a police officer, which could be another reason why he is represented by the King of Spades. The queen covers the king, showing that she controls the dynamics of the relationship. He is a loner. She draws him out and makes him more sociable.

The middle two cards answer the question. I was a little surprised to find another man represented here along with worries and deception. The King of Clubs matches the queen’s suit, indicating a relationship between the two. The 10 of Spades represents worries, suspicion, secrets and lies. It suddenly occurred to me that there was another man in the middle of the seeker's marriage, and she was worried that her husband would find out.

It's always a little awkward when delicate information appears in a reading, but the woman quickly admitted that there had been someone else. It had happened only once, it had been a mistake, and her real question was, "Will the husband ever find out?" In the Answer Spread, a predominance of black cards will usually indicate a negative response—unless the cards themselves indicate otherwise. In this case, the answer to her question was "no," the husband suspects (10 of Spades), but he would not find out.

Again, we can look at the interplay between the court cards for more details. The King of Spades looks toward the 10 of Spades. He may suspect, but he does not know for sure. The King of Clubs looks toward the Queen of Clubs. He is still interested in continuing the secret liaison. But the queen looks away from the King of Clubs, showing disinterest. She is telling the truth that for her the indiscretion is over.

Secrets like this always find a way of surfacing, but the two cards in the position of Contributing Factors confirm that the querent's secret is safe for at least the time being. This pair of cards shows positive growth and a fresh start in love. Although the husband suspects (10 Spades) an affair, the cards indicate that she has been lucky (3 of Clubs) and that her home and family life will not be adversely affected by the tryst (Ace of Hearts).

The Clubs falling on Spades indicate "working through" difficulties or problems, and suggest good communication between the married couple. The Ace of Hearts as the pivot card of the layout suggests a strong marriage and a happy home. Even if the husband’s suspicions were proved true regarding the affair, I believe the strong marriage would survive.
By J David Arcuri at January 13, 2015