Cartomancy Court Cards: Who Are All These People?

A question I hear often from students is, “How can I make sense of a small spread that is dominated by face cards?” Almost one quarter of the 52 card deck is comprised of court cards, and so this is a very common complaint.

In my personal experience the court cards primarily represent the people we encounter in our daily lives: family members, friends, acquaintances and strangers. Even the most retiring wallflower will interact with a multitude of different people every day, both directly and indirectly, and the cards will pick up on these interactions. But what about when it makes no sense within the context of the reading for a court card to represent a person? What about when a cluster of court cards appear that don’t seem to address the question?

Interpreting the Court Cards when they don’t represent specific people can be tricky. There are general guidelines that I follow, but I also use a healthy dose of logic and a good pinch of intuition to make sense of the court card combinations.

First, it helps to have a good understanding of the suit meanings, because the suit will set the mood or the theme for the Court Card. Here is a list of the common meanings I use, but please keep in mind that this list is by no means exhaustive. Feel free to add to these meanings, or subtract from them, or switch them around based on your own intuitive feelings for each suit.

I combine the suit meanings with the archetypal meanings I associate with the Court Card ranks.

The Jacks represent children and young people. Therefore they can denote something small or the start of something. In the days before the invention of the telephone, young boys were employed as messengers, so the Jacks can be the messengers for their suits. Jacks can also represent thoughts, so they carry the idea of movement. It’s important to note that Jacks can represent young males or young females; although in my own readings they almost always represent a male.

The Queens represent women and the divine feminine. They represent motherhood and love, and are nurturing, creative, receptive and introspective. They denote growth and personal power. They bring healing and emotion and intuition to their respective suits.

The Kings are grown men, and the highest ranking court card. They denote mastery, authority, control and leadership. The Kings are protective and commanding, but they can be demanding and even overbearing based on their suit.

As an example, let’s combine the Jack with the Suit of Diamonds…

a small sum of money, the start of a financial venture, a written message, a message about finances, a check, a receipt, a message from your spirit guides, a place for higher learning, etc.

How about the Queen with the Suit of Spades…

traditionally, he is the business man, and he can represent success in business, moving up the social ladder, attaining one’s goals, mastering a physical skill or ability, excelling at a hobby, etc.

Finally, let’s take a look at how to approach a small spread dominated by court cards…

This is a quick mini reading for a querent who had recently interviewed for job promotion. Her question was: Will I be hired for the position? 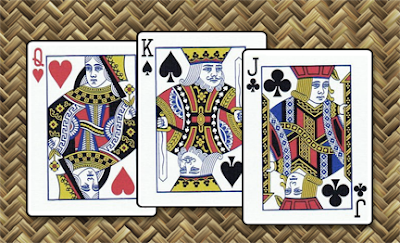 Queen of Hearts, King of Spades, Jack of Clubs

I drew three cards for the question, and since all of the cards in this small spread are court cards, I need to dig a little to find a meaningful answer.

My first impression is that the grouping of face cards indicates strong competition for the job. At least two males are being considered along with the querent (Queen of Hearts) for the position.

The querent is represented in the spread by the Queen of Hearts. She is a woman with hopes and desires; she very much wants the promotion. Sadly, her desire (heart) is overshadowed by a spade, and we know that the spades bring obstacles and failure and disappointment. The answer is clear to me: her heart’s desire is blocked. The querent will not get the promotion. The job will be awarded to a male colleague (Jack of Clubs—notice how the King of Spades looks away from the Queen of Hearts and toward the Jack of Clubs).

Next I need to look at why. It’s not enough for me to simply tell the querent that she failed. I feel obligated to also offer constructive advice to help her turn this failure into a future success.

My answer to the client was that she would not get the promotion because she had not made a favorable impression on her interviewer. The querent admitted that she had felt nervous and intimidated. I advised her that there are techniques she can learn to improve her interview skills, and suggested she take a class or find a good book to help her brush up on these skills so that her next interview will be successful.

As predicted, the querent did not get the job promotion. She took my advice and found a couple of good books on the art of job interviewing, and now plans to utilize her improved skills in finding a better paying job.

As you can see, it is possible to get a good amount of information from a cluster of court cards. The better you get to know the suit influences, the easier it will be to find meaning in a spread dominated by court cards. Also, it’s important to remember that each card can be read in several different ways. In the above example, I read the Queen of Hearts to represent the querent, but also her desire for the promotion. The King of Spades represents failure and disappointment in the reading, but also the gentleman interviewer, and the querent’s lack of mastery. Finally, the Jack of Clubs serves to represent the job interview, the new position, and the colleague who ultimately received the promotion. All of these interpretations are meaningful within the context of the question, and proved to be equally accurate.
By J David Arcuri at January 16, 2015