Musings on the 8 of Hearts


I’ve received several requests from students to share my musings on the 8 of Hearts. This particular Heart card can be tricky to interpret— especially in a love reading—because of its various shades of meaning. But before we contemplate the 8 of Hearts specifically, it may be help full to first take a general look at all of the eights in the modern system of cartomancy.

In traditional cartomancy— specifically in the Italian tradition— the eights can represent people. This is likely due to the fact that the regional decks of southern Italy, which come from the Spanish playing card tradition, are comprised of only 40 cards. The eights represent women, the nines represent horsemen, and the tens represent the Kings. These are the Court Cards in the Traditional Regional decks. So by tradition the eights represent women. Most notably the 8 of Hearts can represent a fair-haired woman, and the 8 of Spades a dark-haired woman, often with revenge in her heart and mind. In Modern Cartomancy, the 8 of Spades is the doctor (male or female). The 8 of Clubs can be a work colleague. The 8 of Diamonds can be a person who is related, usually a distant relative or someone related through marriage rather than blood, and the 8 of Hearts is a loved one and protector. Often in a relationship readings, we will find that the 8 of Hearts will represent a significant other, or the couple as a unit. 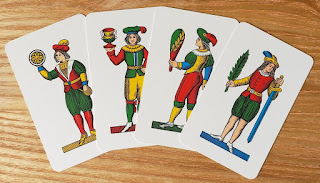 In a work reading, the 8 of Hearts talks about team-building and teamwork. It represents getting along harmoniously with your boss and co-workers. Of course with other supporting cards from the Heart Suit, the 8 of Hearts can reveal an office romance.

In spiritual readings, the hearts refer to devotion and religion, though not necessarily spirituality. Generally, spirit is better represented by the Suit of Diamonds. It can be a subtle distinction, but Hearts represent the soul, and Diamonds represent the spirit. The 8 of Hearts can represent a guardian angel, or the figure of a saint, generally from a religious point of view. In my personal readings, the 8 of Hearts will often appear to represent a religious figure. I was raised Catholic with a good bit of Italian-American mysticism thrown in, so I still petition the help of the saints when I pray. The saint will sometimes appear as the 8 of Hearts in a reading to provide an answer to my request.

In a health reading, the 8 of Hearts represents the major arteries in the body. To read a health meaning for this card, the context of the question must be health-related, or one of the health cards (4 or 8 of Spades) must fall near the 8 of Hearts. If another Spade follows, it can indicate a blockage in the artery. But remember that the 8 of Hearts is generally a card of good health. So in a health reading pay close attention to the cards that fall nearby, and particularly to the card order. For example, the combination 8 of Spades + 8 of Hearts will more likely refer to a return to health than any blood flow problem.

Unless it is besieged by Spades, the 8 of Hearts is a positive addition to any reading. In a daily card draw it can refer to spending time and having fun with family and/or friends. Keep in mind that the 8 of Hearts refers mainly to fulfilled emotions. If you ask if you'll hit the lottery jackpot, and the 8 of Hearts falls as your outcome, it's likely telling you that you have the same chance as everyone else to win or lose.