Who Is That Jack?

Who Is That Jack?†


The most pressing question I still hear from fellow cartomancers is, “How do I interpret a Court Card when it makes absolutely no sense to read the card as an actual person in the questioner’s life?”

I have found in my own readings that a court card will almost always represent an actual person in a general card spread. Our lives are influenced daily by the many people we interact with both personally and professionally, as well as by the people we may never actually meet. The court cards play a very important role in helping to identify these people and the influences they have on the events in our lives.

Conversely, I’ve learned that in a short spread designed to answer a specific question, the court cards will sometimes appear as qualities rather than as actual people. How to tell the difference?

If you find yourself struggling to make sense of the court card as a person within the context of the reading, chances are that the Court Card serves another purpose in the spread. For a general overview on how the Court Cards can function in a reading when they don't represent people, please see my article,"When the Court Cards Do Not Represent People."

In this article, I want to talk about the Cartomancy Jacks, and suggest ways to interpret them when they don’t represent people in your reading.

In the old cartomancy books you’ll find that a common meaning for the Jack is “the thoughts of the King or Queen.” In my own readings I’ve found that the Jack will sometimes represent the thoughts of the questioner, or of the person who is the focus of the reading. For example, it you choose the Queen of Diamonds to represent your female questioner, then the Jack of Diamonds would represent her thoughts, and the cards surrounding the Jack of Diamonds would describe what is on her mind, or what she thinks about the matter in question.

The Jacks as Thoughts and Intentions


The old method works well for a general reading, but the modern questioner is interested in specific answers, which can be provided best with a short spread. A more modern approach that I find works well in my own readings is to consider all of the Jacks as possible thoughts or intentions of the questioner, and to define those thoughts based on the color and suit of the Jack.

Loving thoughts and intentions. He is Cupid the Bringer of Love, and in combination with other cards of the Hearts suit, the jack can indicate an offer of love. He also denotes thoughts of pleasure, healing, and fun intentions. He brings the creative thoughts that are expressed through the arts.

Enterprising thoughts and practical intentions. He is Hermes the Messenger, and he represents knowledge and learning, communication and business ideas, and active participation.

Thoughts of power and success, and intentions for profitable gain. He is Apollo the Bringer of Light. He represents the intellect, the imagination, talent, prophetic thoughts and psychic ability.

Stagnant thoughts and frustrated intentions. He is Seth the bringer of storms and conflict. He represents fear and worry and anxiety. In combination with other cards of the Spades suit, the jack can indicate anger and resentful thoughts, and malicious intentions.


The following Answer Spread illustrates a reading where, based on the context of the question, it does not make sense to read the Court Cards as actual people. This reading is for a female client who reads cards for friends and family, but is afraid to take the step toward reading professionally. She complains that when she tries to read for someone she does not know, the information does not flow. She asks...

“Will I ever be successful as a professional card reader? 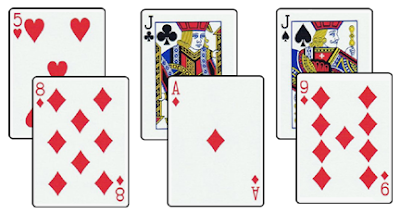 I begin every reading with a quick overview of the cards. I notice a predominance of red cards, which is always a favorable sign. There is also a predominance of the Diamond suit, which represents success, money, intellect, power, and psychic ability– definitely a good sign in reference to the question. Only one card of the Spades suit appears in the spread, and it is not in a key position (neither in the answer column nor in the pivot position). There don’t appear to be any major challenges or obstacles to face in the situation. I notice the pair of black jacks. I’ll address those later in the discussion.

The first column represents the premise of the situation, and shows that the questioner is being stingy with her talents. Reading professionally is a wonderful opportunity to share her gifts with the world, but she is holding herself back. The 5 of Hearts covered by the 8 of Diamonds suggests that the questioner does not place enough value on her own talents and abilities.

The middle column answers the question. In a general sense we could say that a young person will bring a message or invitation, but that doesn’t make much sense within the context of the question. More likely, the Jack of Clubs represents the questioner’s enterprising thoughts of going professional with her readings, and the Ace of Diamonds indicates the successful start of a money-making venture.

What do we tell the questioner? Well, the only black cards in the spread are the two Jacks. That suggests to me that the problems are all in her mind. If she can work past the fear, she can make a very successful start as a professional reader. The 9 of Diamonds in the pivot position shows that not only will it open up her psychic abilities, it will also bring in some extra cash.

When the cards indicate a potential obstacle or challenge, they will almost always provide a solution to the problem. How can the questioner overcome her fear of offering her readings for financial gain? I look to the pivot card, the 9 of Diamonds. It represents the powers of the mind. It covers her fears ( is on top of the Jack of Spades), so we know that she can overcome her anxiety with her mental powers. I advised her to visualize herself as a successful professional reader in her daily meditations, and she will soon achieve the success she desires.


†This is a repost of an article original published on my original Art of Cartomancy blog.